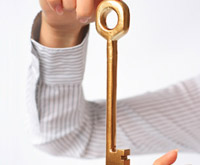 If communication is the “key” to good relationships, then in the parent-child world this “key” is golden. It is one of the most precious tools a parent can use. It can unlock the door to a better relationship, and can help parents regulate their child’s behavior. (That’s right, think tantrum time.) Even more valuable, this key can be passed on to your child so they can learn to have access to their own thoughts and feelings, which comes with positive effects for a lifetime.

Communication in the parent-child world takes special skills. Narrating and Reflective Listening are two skills that are “key” to good communication. Both styles can be used at any age, but typically narration is used for younger – even pre-verbal – children, and reflective listening is for older children including teens. (It works great with adults too!)

NARRATING
(Behavior + Feeling + Reason for Feeling)
Narrating helps children link their behavior with their feelings (or internal states of mind), plus the reason for their feelings.

Example: Your daughter smacks her brother because he took her toy. Narration might sound like, “You hit (behavior) your brother because you are really mad (feeling) that he took your toy (reason for feeling).”

This simple sentence creates a cascade of brain activity, which helps your child regulate their emotions and subsequent behavior. Using language to describe feelings helps the brain shift from a purely emotional reaction to a cognitive – or thinking – process.

BRAIN ACTIVITY
– The right side of our brain is our “emotional brain”. It is more connected to the emotional-processing areas (limbic) and the areas responsible for how our body reacts to the external environment (autonomic nervous system), which includes states of arousal like anxiety and heightened reactions. An increase in heart rate, breathing, sweating and alertness is the body’s response to the right brain getting amped up. Think of the right brain as the “go” switch.
– The left side of our brain is where logic, rational, verbal, and linear capabilities reside. It is responsible for behaviors that inhibit, reduce, and conserve energy. A decrease in heart rate, breathing and states of alertness are physical cues that your left brain is engaged. Think of the left-brain as the “slow down” switch.
– So, if your child is feeling mad, which would activate the right-brain (increased arousal) the way to down-regulate their behavior is by using a left-brain (decreased arousal) activity, like language.
– If you have even been really upset and talked to a friend, you know how good it can feel to have your feelings heard, accepted, and understood. It is the same for children. Only now, we know it not only feels good, but talking actually helps our brains regulate. Behavioral regulation emerges from this inter-play between the right and left brain.

REFLECTIVE LISTENING
(Feeling + Reason for Feeling)
As children grow up, narration gives way to a skill called reflective listening, also called Listening for Feelings. Like narration, this skill links a feeling with the reason for the feeling. Unlike narration, you don’t need to include the behavior since older children are more likely to know that their behavior stems from their feelings.

Example: “You are disappointed (feeling) that you came in second place (reason).”

“I understand that you are angry (feeling) because you want to watch TV (reason), but it is not okay to throw the remote (behavior).”

“You look (behavior communicated through body language) disappointed (feeling). I think it’s because you wanted to stay at the park (reason). I can understand that, I like having fun too, but now it’s time to go home.”

“It’s okay to have big feelings (feeling), but it is not okay to hit another person (behavior). If you want a change to play with the toy (reason), you have to wait.”

“I know it can be hard (feeling) to wait (behavior), but your sister had the toy first (reason). Sometimes it can be hard for me to wait too. What about if I read a book to you while you wait?”

“You feel impatient (feeling) because you want a turn (reason).”

“You look excited (feeling). Is it because you did well on your test (reason)?”

“You think I am being unfair (feeling), because your friends are going (reason), but unless there is an adult to supervise I don’t think it is safe. One of my jobs as a parent is to keep you safe.”