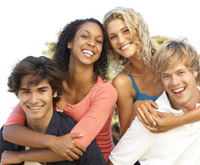 Yes. That’s right. We are defending teenagers. Well, actually, just for a few key traits like being irrational, self-focused, resisting reasonable bedtimes and their desire to experiment. Now we know that these traits can drive parents nuts, but what are we supposed to do when research has discovered a biological basis for them?

The frontal lobes, which are the part of the brain that asks insightful questions like, “Is this a good idea?” “What are the consequences of my actions?” or “How will this affect others?” is not finished developing in the teen brain. The nerves in this part of the brain don’t have as much coating (myelin) as those of an adult, which means they can’t send signals as efficiently or as quickly. This electrical insulation isn’t complete until a person’s mid-20s. So, although teenagers are capable of insightful thinking, they just do it more slowly than adults. This also helps explain why teens are self-focused because it takes their brain longer to think about how their actions will affect others.

So, in defense of teens, remember they need help thinking through their behavior and time to see beyond their self-focused world.

The brain chemistry of children and teens is more excitable making them more likely to be curious and want to explore. This may be nature’s way to encourage learning.

So in defense of teens, just because Mother Nature set teens up to be more responsive to their environment, it’s up to Mom and Dad to steer them in the right direction and provide appropriate stimulation.

We all have a circadian rhythm (a.k.a. internal clock) that helps regulate our sleep cycle (also body temperature, hormones and appetite). This is what influences young children to fall asleep, and many adults to become sleep, between 7-9pm. What researchers have found is that puberty changes a teen’s circadian rhythm. It creates a “phase-delay” causing many teens to feel sleepy at 11pm or later.

This phase-delay is unfortunate because it contrasts with early morning school schedules, preventing teens from getting the 9+ hours of sleep they need per night. This is 1-2 hours more than 9 and 10 year olds need! Teens probably need the extra sleep because growth and sexual maturation hormones are released during slumber. Unfortunately the average teen gets less than 9 hours of sleep per night and 10% of teens reporting getting less than 6 hours. This means most American teens are perpetually short changed on sleep.

So in defense of teens, the next time your teenager falls asleep at the breakfast table, gently remind them that although they may be fighting against their biological sleep cycle, it would be in their best interest to try to get to bed earlier.

Sleep tips:
– Cut down on caffeine.
– Minimize bright lights after sundown.
– Minimize screen time close to bedtime.
– Recognize psychosocial pressure (a.k.a. peer pressure) to stay up late from friends.
– Daily exercise helps, but be sure it happens at least 2 hours before bedtime.
– Poor parental modeling can affect how teens perceive the value of sleep.
– Light from digital clocks can be enough to disturb sleep even if the sleeper is not fully awake.
– Calming bedtime routines can help not only young children, but teens and adults.
– Teens who stay up much later on weekends, may have more difficulty transitioning to an earlier bedtime on weekday. Keeping regular sleep routines can be helpful.