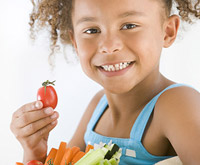 We all know that veggies are good for us and many parents would like to encourage their children to eat more, so what does research say can get the job done? We found 5 studies that may help.

Researchers found that when veggies were served with more popular items, like chicken nuggets, children choose to fill up on the popular item and not the vegetable. To get kids to eat more vegetable, pair veggies with less popular foods or serve the veggie first and then introduce the popular item a little while later.

Researchers found that preschoolers ate nearly twice as many veggies and consumed 11% few calories when pureed vegetables were added to kids favorite foods each day. Similar results were found when “vegetable-enhanced entrees” were served to adults.

Some argue that hiding vegetables is deceptive and/or suggests that whole vegetables are not acceptable, but others argue that recipes are modified regularly to suit the needs and tastes of individuals.

Mother’s who led by example and brought home healthier foods into the home had children with healthier diets. This finding seems pretty straight forward, however many of us know all to well how hard it can be not to grab a bag of chips at the grocery store or abstain from dessert.

The study also looked at encouraging healthier choices as opposed to forcing healthier food choices. Encouragement came in the form of:
– Maintaining regular meal and snack times.
– Offering smaller portions of healthy foods.
– Having children pick our their own fruits and vegetables at the store.
– Having children select new healthy foods they can cook.
– Not overtly restricting certain foods when other children are eating the same foods around the child being restricted.
– Not forcing or yelling at kids to eat healthy foods but rather respectfully encouraging them to make healthier choices.

New federal rules have prompted schools to serve an extra $5.4 million dollars of fruits and vegetables each day, but children throw away approximately $3.8 million of that daily. Researchers conducted a study to measure if children would eat fruits and vegetables in exchange for small rewards such as a nickel, quarter, or raffle tickets for larger prizes. It worked. Children increased their consumption by 80% and food waste declined by 33%.

This study demonstrates that incentivizing children to eat healthy has positive outcomes. This strategy, which can also be labeled as bribery, has received a bad wrap from some experts. They say it crushes internal motivation and can produce a boomerang effect, where once the bribe disappears the behavior deteriorates even more. Researchers in this study discovered that once the incentives disappeared children returned to their previous levels of fruit and veggie consumption. This illustrated that there were no lasting improvements, but no boomerang effect either.

Researchers found that introducing Repetition, Role Modeling and Rewards, aka the three ‘R’s’, could help parents to get their fussy eaters to try more veggies and even like them. The three R’s are described as:
– Repetition = Repeatedly exposing children to certain foods.
– Role Modeling = Having the adult eat the veggie first and show how yummy it is.
– Rewards = Praising children for trying and eating new vegetables.