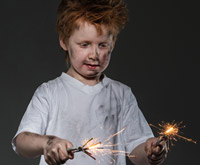 Okay, we are going to blow your mind, in a parenting kind of way. What if the next time your kid does something wrong, they aren’t the problem. What if the problem is the problem and your kid, well they are just affected by it. Crazy huh, but this type of thinking comes from a branch of psychology called narrative therapy and there is a real benefit to this approach.

Narrative therapy seeks to be respectful and non-blaming, and has at its centerpiece the idea that the person is not the problem. The problem is the problem and the person is separate from it. For example, instead of a therapist saying, “You suffer from depression” a narrative therapist might say, “Depression has found a way into your life”. They would go on to explore this ‘thing’ called depression and how it came to reside in the person’s life. With the help of the client, they may even give the problem a name that is specific to how it affects the client like ‘Mr. Downer’. The narrative therapist may explore ways the client was successful in keeping Mr. Downer at bay and encourage strengthening those.

So how can parents use this approach with their kids? Well, here are two scenarios.

A 4-year-old gets into everything. They open up packages, get into cupboards, go through belongings, explore drawers and no matter how a parent may try to put stuff up high or out of sight, they are just driven to explore, touch and manipulate every object they can get their little hands on.

Narrative Approach:
“Uh-oh looks like your curious fingers got into my purse again. Let’s talk to those fingers about asking first.” The parent can then playfully talk to the child’s fingers, reminding them not to touch objects unless they ask. When the child reaches for objects in the future the parent can remind the child about ‘curious fingers’.

Benefits:
The approach in this scenario allows the parent to set a boundary in a non-blaming, non-confrontational and respectful manner. It keeps the approach positive and playful instead of the typical approach of “stop that” which is negative. Young children are concrete thinkers so imagining their fingers as ‘curious’ plays into that. It gives the child a clear and manageable way they can intervene to solve the problem. Learning to stop ‘curious fingers’ is a lot easier to understand and implement than trying to control their internal drive.

A teenager feels insecure. No matter how long they primp in the mirror, change their clothes, think about what to say to their friends and critique every aspect of every move they make, they always fall short of whatever ideal they have set for themselves.

Narrative approach:
“That annoying insecurity thing popping up again? Remember how we talked about all the negatives that it brings in with it like self-doubt, wasting time and more. Remember how you discovered that there are ways in which you are stronger than insecurity. Like that time you spoke your mind in class even though it was making your hand tremble. How do you think you can be more powerful than it now?”

Benefits:
Like in the first scenario, this approach is non-blaming and respectful. It parcels out aspects of feeling insecure, like self-doubt and worry, making it easier to understand and implement solutions. Narrative therapy is a popular modality when working with teens because of its respectful approach that encourages the teen to be investigators in their own lives – exploring the problem and brainstorming solutions. It also allows the therapist (or parent) to be a facilitator who asks strategic questions, rather than an expert. Writing to explore the problem and the stories teens have built up about themselves is also a popular and effective tool in narrative therapy that works well with teens.

Critics of narrative therapy often say the modality does not dig deep enough and glosses over too much. This may be true, but not everyone needs or wants to psychoanalyze him or herself, nor is it always necessary for personal growth. Critics can also accuse narrative therapy of not holding people accountable for what they do. It is true that narrative therapy separates the person from the problem, but this technique often decreases defensiveness making it easier to look at problems. It also tends to empower people, making them feel as though they are capable of overcoming the problem.