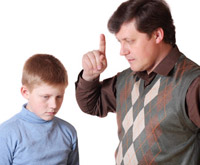 When a child misbehaves, ideally we should use that moment to teach a thoughtful and constructive lesson, but reality can be different. Especially when we are stressed, overwhelmed or tired. Sometimes a quick verbal reprimand is a lot easier and more convenient. If we are not watching our tone or words, our message can be unhelpful. Sometimes it can even shame our children. This is because statements like “what’s wrong with you” and “crying is for babies” attack the child’s character and not their behavior.

Knowing if our children are shamed can be difficult because shame is a private emotion. In the U.S. we rarely talk about feeling ashamed. It is not a common part of our cultural, social, or family discussions. There is also no corresponding facial expression, like there is for sadness or happiness. This can make it difficult to detect if a person feels ashamed.

Shame and feeling ashamed is one of the most powerful and painful human emotions. When we feel shamed we feel bad, not about what we did – that’s guilt – but about who we are. Shaming messages received in childhood can have a profound impact on a person’s sense of self-worth. Particularly messages that come from parents and other loved ones. So, it is an adult’s responsibility to tame that shame whether we are dishing it out or suffering from old wounds (because who wants to live harboring such a painful emotion).

THE ORIGIN OF SHAME

Shame can be a powerful disciplinary tool because it works. If used in a moderate, non-punishing manner many experts believe that shame has a role in discipline and is unavoidable because it is part of normal emotional development. The problem is that shame often works too well. Some parents, particularly those that are overwhelmed, irritated, lack effective discipline strategies, and have histories of being treated in a shaming way, can overuse shame. Even parents who don’t intend to shame their children should think about the impact of their words.

Shame can also be delivered in non-verbal ways. A disapproving head shake or a certain look can be powerful shaming tools.

Shame can also develop when children’s emotional needs are dismissed, un-noticed or trivialized. These children may wonder what it is about them that causes a parent to ignore their needs. Parents who are overly focused on themselves can inadvertently inflict shame on their children.

Children that are repeatedly or harshly shamed shift from experiencing “normal” shame to internalizing “toxic” shame. They start to feel that they are the problem. That something is wrong with them.

Toxic shame works its way deep into a person’s psyche and becomes part of their self-image and self-worth. Those who suffer may not be aware they do, but struggle with feelings of failure, not being successful enough, chronic self-doubt, and gnawing anxiety. Feeling inadequate, inferior and unworthy are also common and are the bedrock of low self-esteem.

Some people may try to cover up their shame with attitudes of self-deprication, obsessive perfectionism, superiority, contempt, hostility, or by bullying others. Some studies have linked shame with a desire to punish others. Children show a decrease in exuberance, curiosity, a desire to do things alone and it restrains their self-expression.

Researchers have found that individuals who are more prone to being shamed are sometimes less capable of empathy towards others. This may be because when a person is repeatedly shamed the focus is on them. These individuals may monitor their behavior closely to keep from being shamed or feeling ashamed in future situations, allowing little space or time to think about others. It may also cause individuals to withdraw and become more isolated as a way to protect themselves.

GIRLS TO WOMEN AND BOYS TO MEN

Low levels of serotonin may make some individuals more vulnerable to feelings of shame or being ashamed.

Shame is thought to reside in the same place of the brain as physical pain.

To avoid shaming messages, use discipline not as a punishment, but as an opportunity to teach children self-discipline, which is after all the goal. Give children clear choices and consequences. For example, “you can have a cookie if you finish your dinner. The choice is yours.”

Parents also should recognize that sometimes what we think of as misbehavior is really a developmental stage. For example, toddlers are often possessive with toys, which is a normal developmental stage. Some parents may interpret this possessiveness as selfishness and inadvertently shame their child to hand over a toy.

If you are a person that carries or feels ashamed you can start to move beyond it by reflecting upon the reasons for it.