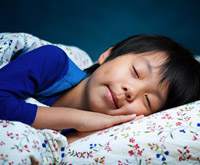 Two current research studies shed new light on the importance of having consistent bedtimes for kids and the long-term impact, or lack of impact, of letting a baby “cry it out”.

New research suggests that the consistency of a child’s bedtime may be just as important for their long-term cognitive abilities as the number of hours they get.

The UK Millennium Cohort Study analyzed data from 11,178 children whose families were asked about their bedtimes at age 3, 5, and 7. At age 7, the children were tested on reading, math, and spatial skills. Those with the poorest test scores were not those that went to bed early or late, but rather, those that had inconsistent bedtimes. Girls showed greater cognitive impairment than boys, who showed no “significant” impairments.

Researchers are not sure why consistent bedtimes affect a child’s cognitive abilities, but they hypothesize that it may be an important element in maintaining circadian rhythm functioning. This important function benefits the whole body, including the brain. The researchers also acknowledged that they weren’t certain if a lack of consistency also signaled a lack of sleep, as they did not keep track of what time the children woke up. Most parents are aware that young children tend to wake up around the same time no matter what time they go to bed.

Consistent bedtimes must also be adhered to on the weekend, give or take a half hour to an hour.

LETTING A BABY “CRY IT OUT”

Unless you are among the lucky, getting a baby to sleep through the night is a difficult task. Letting a baby “cry it out” is often an effective, but controversial method. Researchers at the University of Melbourne recently published a long-term study examining two of these methods, “controlled crying” and “camping out”. Researchers looked at whether children who went through these two methods experienced any long-term harm. The study found they did not experience any long-term harm.

It is worthwhile to note that the study did not include children younger than 7 months. The study did note that teaching an infant to sleep did alleviate infant sleep problems and associated maternal depression. Critics of “crying it out” still argue against this method.

Controlled crying is allowing a baby to cry for small amounts of time before comforting them – one minute, then two, five, and so on. Camping out is staying in the baby’s room while they learn to settle themselves.