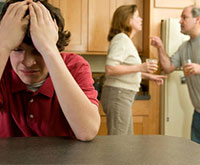 Why are some children negatively affected by parental conflict while other children seem to escape with few significant problems?

A 2013 research study sheds light on this question. Researchers found that how children understand, interpret and perceive the conflict between their parents impacts them emotionally and behaviorally. Children who blame themselves for the conflict, even if they are not to blame, are more likely to have behavioral problems such as anti-social behavior. Children who feel threatened in an emotional way or fearful that the family will split up, even if this is not the reality, are more likely to experience emotional problems such as depression and anxiety.

Researchers noted that the nature of the conflict was important and impacted children more than the number of fights. The worst parental arguments for children were those that were verbally aggressive, physically aggressive, involved the “silent treatment”, or were intense disagreements about the children. These types of fights are also the least effective in helping parents find solutions to their arguments. The study also found that fighting behind closed doors does not always protect children from adverse affects because children are savvy and often know that something is going on.

Research has demonstrated that children as young as 3 are able to pick up on parental tension, although it is easy to surmise that even younger children are aware of tension as well. Young children may act out, freeze or become very clingy in response to parental fighting.

Boys and girls, generally, react differently to parental conflict. Boys tend to withdraw and girls tend to try to get involved. Researchers also found that girls have a higher risk for depression when their parent’s relationships are hostile or there is a negative mother-child relationship. Sadly, depressive symptoms in daughters can create a negative feed back loop. The more depressed the daughter becomes over the parental strife, the more it increases hostility from both the mother and father toward the daughter.

According to researchers, “arguments that are dealt with efficiently, that are conducted calmly, and that show clear messages of negotiation and resolution, can have positive implications for children.” These types of arguments are also the most constructive in helping parents find solutions to their disagreements. Constructive conflicts can teach children the art of compromise, compassion, the use of humor and warmth, the ability to listen to another’s point of view, how to vocalize one’s own ideas and more.