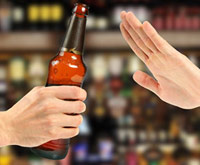 Want to play a drinking game? Nope, not that kind, one that highlights four new research studies that shed light on teenage drinking.

We will even start off with a hint. According to research, parents don’t influence if their teen tries alcohol, but parents do have an influence over how their teen uses alcohol.

QUESTION 1
When it comes to alcohol which approach do you believe is most likely to curb teen alcohol use:

If you guessed #2, the “no-use” approach, then you are correct according to a study published in the Journal of Studies on Alcohol and Drugs. In fact the study suggests the “harm-minimization” model may actually encourage more drinking and lead to more alcohol related consequences. Researchers said that teens need “black and white messages early on” and “such messages will help reinforce limits as teens get older and opportunities to drink increase.”

If you are wondering about the belief that European teens drink less because of the relaxed and more tolerable attitude in Europe, this belief is unfounded. European teems are similar to Americans in that drinking depends on the teen and parents have similar amounts of influence over their teens.

QUESTION 2
Which parenting style do you think protects teens against heavy alcohol use, defined as 5 or more drinks in a row?

If you guessed #3, parents who score high on both knowing the whereabouts of their kids and warmth, then you are correct. Prior research displayed mixed results on which parenting style was most affective in limiting teen drinking, but the Brigham Young University researchers distinguished between alcohol consumption and heavy use. Religious teens were also less likely to drink and kids of parents with high accountability and warmth also tend to have friends who drink less.

Researchers were mindful to point out that there is a difference between controlling your teens behavior, an approach of strict parents, and knowing where and how your teen spends their time.

QUESTION 3
In some studies teens have reported they are less likely to use substances if their parents share their own substance history, including cautionary ones, with them. Do you believe this to be true?

Researchers examined this belief held by teens and found the opposite to be true. They found that parent who did not disclose their own drug us, “but delivered a strong anti-drug message,” were more likely to have teens who exhibited an anti-drug attitude.

QUESTION 4
Will talking about alcohol with your teen before they head off to college, affect how much they drink once they are there?

According to recent research, the answer is yes, talking to your teen before they go to college will make it more likely that they abstain from drinking or drink only minimally.

Researchers recruited 1,900 students and categorized them into 4 groups:

They sent parents a handbook that contained information on:

Parents were asked to read the handbook and talk to their teens one of the three assigned times:

Researchers already knew that without intervention teens moved from one drinking level to a higher one. For example, a light drinker would become a moderate drinker and a moderate drinker would become a heavy drinker. Researchers found that if parents followed the handbook before teens entered college then their teens were more likely to remain in the non-drinking or light drinking groups and to transition out of the heavy drinking group if they were already drinking.

The handbook referenced is by Dr. Bob Turrisi:
hhtp://ase.tufts.edu/healthd/documents/parentHandbook.pdf